The Cultural Heritage Conservation Science Center conducts infrared reflectography to look through the surface paint to reveal baseline sketch and documents the current status of the painting by recording surface contaminations and missing parts. Infrared reflectography has discovered hidden paintings underneath the painting layer and pigment names marked for easier coloring. Documenting the current status of a Buddhist painting is essential in deciding whether it needs conservation treatment or not.

The Conservation Science Division examines and analyzes large-scale Buddhist paintings closely with various equipment. Through the process, we are able to collect diverse information about cultural heritage. What material was used to make the screen on which the Buddhist painting was drawn? What coloring materials and pigments were used for the Buddhist painting? To answer these questions, we employ non-destructive testing equipment and take a small amount of sample to investigate again at the lab for a more credible result. The research and analysis largely focuses on two areas, on the fabric and pigments.

The material and the weave of the fabric used are examined under a microscope. Hemp cloth, silk and paper were the most common material and many paintings connected multiple strips of fabric to cover the large screen.

The Buddha is drawn on the large fabric and then colored to bring the painting into life. For coloring, a variety of pigments and dyes were combined to depict various colors. The researchers first examine the shape and size of the pigment particles and the coloration status through a portable microscope and analyze the ingredients with portable X-ray fluorescence spectrometers. Spectrophotometer is used to measure the color difference in order to make a clear distinction between single or mixed colors of pigment. If pigment particles are not identified, it means that dyes have been used for coloring. Dyes are analyzed through UV-VIS spectrometer and Raman spectroscopy.

The analysis results revealed the following components for colors red, white, black, green, blue and yellow. Red pigments used in large-scale Buddhist paintings include Cinnabar, Minium and Seokganju where these have been used independently or mixed. For white color, Lead White, White Clay, Talc, Oyster Shell White, Mica and Titanium White were used. It is difficult to discern the ingredients for black color through non-destructive inspection and a fairly large amount of sample is required for precision analysis. Common ingredients for black are Meok (ink stick) or Indigo dye. The most popular ingredient for green color of Buddhist painting is Seokrok, a type of green pigment coming from rocks, which is used alone or mixed with Lead White. Ultramarine Blue, Azurite, Smalt, Prussian blue and Indigo dye were used for blue color, often mixed with each other to portray a wide range of blue colors from light blue to indigo. Azurite was the most used blue pigment, while the Annals of the Joseon Dynasty documents imported Smalt as the earliest among the cobalt pigments. For yellow, Gamboge dye and Orpiment, arsenic sulfide mineral pigment were used.

Other scientific investigations conducted on large-scale Buddhist paintings include ultraviolet irradiation for checking damaged sections that were repaired in the past, analyzing the species of the wooden box used to store the painting, microorganism study of both the painting and its storage area to provide preliminary data for conservation and management. Through these efforts, we re- discover values hidden in these large Buddhist paintings and prepare to pass down these paintings safely to future generations. 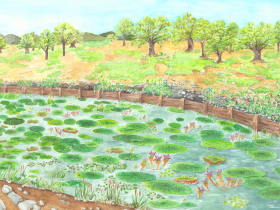