Iksan Mireuksa Temple Stone Pagoda (National Treasure No. 11) is the largest and oldest stone pagoda that exists in Korea. It is the last standing pagoda of the three that was built in the 7th century at the time of King Mu of Baekje. In the late 4th century, when Buddhism was introduced to Korea, wooden pagodas were constructed in the beginning, but stone pagodas gradually became popular. The stone pagoda of Mireuksaji represents the changing style from wooden pagoda to stone pagoda, and has an important historical and academic value. The book (a) shows photos and the timeline of the historic records, different surveys conducted in modern and contemporary era and the 20-year repair and maintenance work conducted by NRICH since it was decided to dismantle and repair in 1999. The volume I of the repair report (b) is the summary of the progress of the project, from surveys, researches, conservation treatment to reassembly. Volume II includes blueprints before and after the repair; Volume III includes documentation cards of all parts. 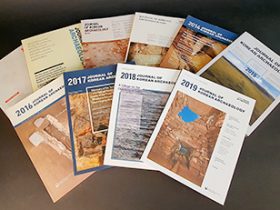