The year 2021 is a significant year in the history of Korean archaeology because it marks the 50th anniversary of the discovery and excavation of the Tomb of King Muryeong, the 25th King of the Baekje Kingdom.
For nearly 700 years from around 50 BCE, known as the Three Kingdoms period, Goguryeo, Baekje, and Silla prevailed on the Korean Peninsula and Manchuria. Ruled by strong monarchies, the three kingdoms frequently engaged in wars with one another. Under these circumstances, King Muryeong revived Baekje from decades of turmoil that had followed the defeat in a war with Goguryeo.
The splendor of the tomb matches his stature: built in the brick tomb style of China’s Liang Dynasty, the Tomb of King Muryeong is home to thousands of artifacts and is sumptuously decorated with precious metals such as gold and silver.

The keywords that always accompany this tomb are “the first,” and “the only.” To begin with, the Tomb of King Muryeong is the “first” tomb from the Three Kingdoms period that is known to have never been robbed. Until the moment when it was accidentally discovered in 1971 during drainage work on Tomb No. 6 located slightly downhill, this royal tomb had the fortune of escaping pillage and robbery that were particularly rampant during the Japanese colonial period, thereby surviving intact and now presenting us with quintessential examples of Baekje culture.

Next, the Tomb of Muryeong is “the only” tomb whose owners have been identified. Inside the tomb, two memorial tablets were recovered, which are certificates stating that burial land for the king and his queen was purchased from the god of the earth. The king’s tablet stipulates that King Muryeong died at the age of 62 in 523 CE and was buried in 525 CE. Similarly, the queen’s tablet states that she died in 526 CE and was buried three years later in 529 CE in her husband’s tomb.
Knowing the identity of the owner of the tomb means that we can also figure out when the tomb’s artifacts were made and that similarly styled artifacts recovered from other sites are from around the same period. For this reason, the discovery of this Baekje tomb has greatly influenced archaeology not only in South and North Korea but also in China and Japan. Even today, it is considered among the most important and valuable tombs in East Asia.
The Tomb of King Muryeong is one of several tombs that constitute the Royal Tombs in Songsan-ri. The tombs were built during the Ungjin period in Baekje’s second capital Ungjin (present-day Gongju). These historical circumstances make it likely that a “second” Tomb of King Muryeong is just waiting to be discovered. For this reason, this year, which marks the 50th anniversary of the tomb’s discovery, the NRICH launched a new excavation campaign in the Songsan-ri area.
It is our expectation that NRICH’s ongoing research will reopen secret doors to the untold history of Baekje that has remained shrouded in mystery. 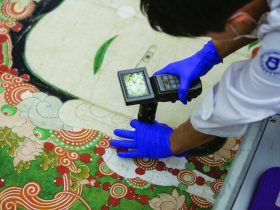