The Cultural Heritage Conservation Science Center under the NRICH completed the conservation treatment of the Irworobongdo (Painting of the Sun, Moon and Five Peaks) from Injeongjeon Hall, Changdeokgung Palace and published a report containing the process of conservation and related research results. Irworobongdo is a painting symbolizing eternal vitality with a sun, a moon, five peaks with pine trees and rippling waves in a symmetric composition and typically installed in a king’s space to emphasize the king’s presence and authority during the Joseon Dynasty (1392-1910). The Irworobongdo of Changdeokgung Palace is a four-fold folding screen, originally placed behind the throne in the Injeongjeon Hall, but it was damaged with pigments peeling off and the frame twisted as the main hall of Changdeokgung Palace opened to the general public. At the end of 2015, the folding screen was transferred to the Cultural Heritage Conservation Science Center and went through dismantlement and conservation treatment from 2016 to 2021. The report includes the overall conservation treatment process of Irworobongdo from Injeongjeon Hall, Changdeokgung Palace as well as analysis on materials, art historical research on deformation of the folding screen, historical evidences on janghwang (traditional Korean mounting) and the significance of test answer sheets used as backing paper. 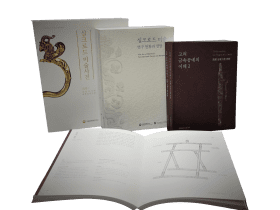