Over the past five years, NRICH has undertaken conservation treatment on a gilt-bronze standing Bodhisattva recovered from the Seollimwon Temple site, Yangyang, restoring the original form and gold color of the statue. The research team also figured out how and when it was built.
The largest among gilt-bronze standing Bodhisattvas with a clearly identified place of origin, the artifact measures 38 centimeters high. Its ornateness has garnered much attention since the time of its discovery. Prior to the recent conservation treatment, the statue was covered with thick layers of soil and corrosion, with its right ankle detached from the lotus pedestal and its halo broken into several pieces.
An X-ray analysis, endoscopic examination, materials analysis, and other scientific inquiries were conducted before conservation treatment took place in the order of corrosion layers removal, reinforcement treatment, and the gluing of separated parts. The corrosion layers removal was a particularly tricky and important process that was required to reveal the original gilt-bronze surface. In the end, this process led to the restoration of ink lines and pupils meticulously drawn on the surface of the statue. In the interim, an absolute dating of mulberry paper obtained from the statue revealed that the artifact was created between the 7th and 9th centuries.
Using 3D scanning, the research team was also able to restore the original form and production technique used for the statue. Unfortunately, it has proved impossible to attach the broken right ankle back to the pedestal. However, NRICH plans to restore the statue digitally next year by using the advanced restoration technique. 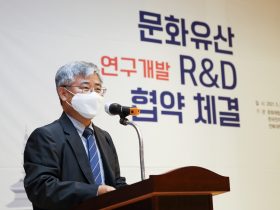